a homecoming (of sorts)

it's a week that can possibly be described as "good living" (to borrow a phrase from my friend, rudy), but in a particular sort of way. a few weeks ago a planned mission trip for a handful of youth took a radical change in course when the floods hit cedar rapids, our intended destination. e-mails were sent out, an invitation was extended from the pulpit, and adults were invited to come along for a week in july to help with flood relief work.
and people responded. some already had vacation time scheduled and cancelled other plans to travel to iowa. others made arrangements to be away.

then came the supplies, as word about the trip got around people started bringing in donations - money, supplies. enough to fill a 22' truck. i was overwhelmed. 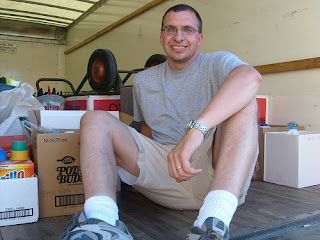 we set off last sunday morning, 22 of us in total, making the journey along i80 to iowa. during the next four days we tore out drywall, cleaned out basements, and ripped up flooring, in addition to a few other projects. our efforts hardly made a dent in all the work there that still needs to be done, but we did what we could to lend a hand where it was needed, and the sweat and sore muscles felt good, knowing that at least a few people were helped through our work. the amount of destruction the flood brought is pretty incomprehensible, but there is hope and a commitment to rebuild - and to hear the stories of those who have been through it all is inspiring. to sheila, jose, courtney, and all those others who opened their doors and invited us into their homes so that we could help; thank you, and you continue to be in my prayers as you rebuild.

along the way i had a chance to catch up with some good friends i hadn't seen in years. and though life has changed for all of us along the way, it was good to know those bonds of friendship hadn't changed.

the week was capped off with an AMAZING performance called "moving home" at the brucemore in cedar rapids - this is a production they put together in a couple weeks - drama, music, and art - all about the experience of the flood. seriously if you are anywhere in the vicinity of eastern iowa, you should get tickets to this (available here, proceeds benefit the cedar rapids community foundation flood fund). (i actually have more to say about this, but i'll save it for another post).
at July 12, 2008